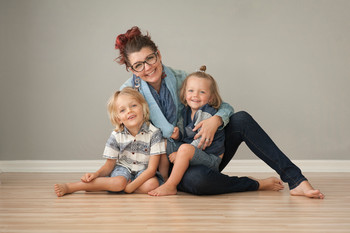 Drawn to the medium of photography from a young age, Erin Dougherty Williams spent her earliest years exploring Florida’s Gulf coast with a camera in-hand. Erin translated this natural aptitude into an award-winning career as a visual storyteller and creative entrepreneur, working successfully across genres, earning accolades in the high-end commercial field while exploring her own perspective and artistic priorities.

A native of Naples, FL, Erin first returned to Florida after completing her degree at the Rhode Island School of Design to work alongside fashion photographer Jorge Alvarez’s studio. This early opportunity exposed Erin to clientele including People Magazine, GQ, Vogue, and other international publications, work that subsequently opened the door to collaboration with additional A-list fashion photographers over the next 15 years. Erin attributes much of the technical skill that is evident throughout her personal work to this formative experience.

In her artistic work, Erin applies an intricate understanding of studio lighting to dramatize, set the tone for an image, and direct the viewer’s eye to the details she considers the most revealing. Then she assembled these details into nonlinear narratives across groupings of images. These articulated dreamscapes are intended expose contradictions and juxtapositions within the story. Particular subject matters to which Erin is drawn for exploration include interpretations of feminism and sexuality. A series of images entitled “Vulnerable Silences” grew from this desire to investigate the possibility of being the object of desire without being made vulnerable by the viewer. This series was presented in dozens of shows around the country in both group and solo formats, winning multiple awards, including one from the New York Times art critic William Zimmer.

While living in Eugene, OR, Erin along with her husband, Chihuly-trained glass artist Conrad Williams, established Studio West, a glassblowing and fine art gallery, which soon grew to be recognized as the most popular activity in the city. Erin enjoyed curating gallery exhibits that asked viewers to consider and resolve the questions posed by contrasting material. During this time, with a newborn son and growing business, Erin downplayed her own work, though continued as a freelance tech for catalog companies.

It wasn’t long, though, until Erin felt the creative impulse and committed to a new personal goal to photograph 1000 portraits of Eugene residents. Initially undertaken to more deeply apply certain technical abilities, the connections Erin made with the people in front of her lens inspired her to expand the project. Blossoming into a far-reaching community initiative, Erin organized pop-up photo booths in town, and opened her studio to the public for free portraits. Limiting herself to nondescript backgrounds and sparse props, Erin encouraged her subjects to “come as you are.”

With so much of her work to date defined by bright colors and highly stylized aesthetics, this inspired departure led to the refinement of a visual vocabulary grounded in detail, necessarily focused on the narrow context of the subject as the primary objective. Subtleties assumed heightened importance, and the texture of a person’s skin, a single piece of jewelry, or a bit of hair out of place became a key part of the story. Mindful to capture the in-between moments when a person wasn’t yet consciously posing, Erin could authentically explore the honesty of an image, identifying the contradictions in life she finds so compelling. Vastly exceeding her initial expectations, the venture ultimately drew over 5000 participants. Again, directed comparisons and pairings were essential to the experience, viewing individual images collectively to better acknowledge the whole. Excerpts have been exhibited as a mural and in book form, including at Artis-Naples in Naples, FL.

Now based primarily in Naples with her husband and their two children, Erin continues to nurture her love of portraiture, as well as supporting the ongoing cultivation of Conrad’s glassblowing interests. Erin is endlessly fascinated by people, and aspires to capture not only what we immediately observe, but the images that we may not be so quick to notice: our passions, our anxieties, and our desires. Upcoming work is certain to combine her superlative technical skill, including a nuanced application of studio lighting, with more conceptual underpinnings, and always a love of story.